Lady Gaga has apologised for working with embattled R&B star R Kelly, and vowed to remove their duet, Do What U Want, from streaming services.

It comes after the broadcast of a new documentary about Kelly, which detailed allegations of sexual and physical abuse against women and underage girls, spanning several decades.

Gaga called the stories “horrifying” and “indefensible”, adding: “I stand behind these women 1000%”.

Kelly has denied all the allegations.

His lawyer also dismissed the documentary as “another round of stories” being used to “fill reality TV time”.

But film-maker Dream Hampton said the film depicted how Kelly had “built an ecosystem around his predation“, after almost three decades of “preying on young and vulnerable women”.

Gaga had been under pressure to comment on the allegations against Kelly ever since she collaborated with him on 2013’s Do What U Want (With My Body).

The song was controversial from the outset, as stories about Kelly’s personal life had already been widely reported, while he had stood trial on charges of child pornography in 2008 – when he was found not guilty. 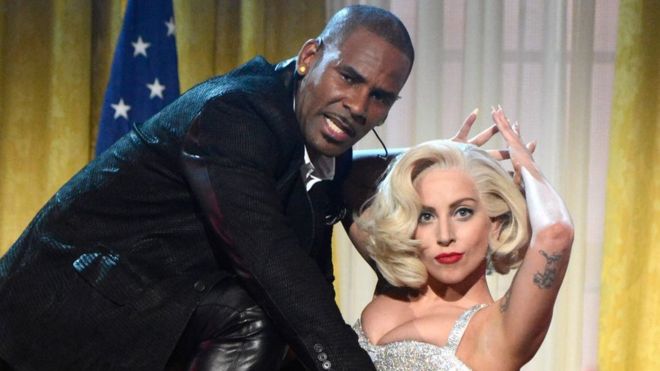 At a press conference in Japan in 2013, Gaga defended the collaboration, saying: “R Kelly and I have sometimes had very untrue things written about us, so in a way this was a bond between us.”

But calls for her to condemn Kelly resurfaced last week, after it emerged she had allegedly declined to be interviewed for the Lifetime documentary.

The star, who is a vocal advocate for victims of sexual abuse, broke her silence on 10 January by posting a long statement on social media.

“I stand behind these women 1000%, believe them, know they are suffering and in pain, and feel strongly that their voices should be heard and taken seriously,” she wrote.

“As a victim of sexual assault myself, I made both the song and the video at a dark time in my life.

“My intention was to create something extremely defiant and provocative because I was angry and still hadn’t processed the trauma that had occurred in my own life. The song is called Do What U Want (With My Body), I think it’s clear how explicitly twisted my thinking was at the time.

“If I could go back and have a talk with my younger self I’d tell her to go through the therapy I have since then, so that I could understand the confused post-traumatic state that I was in – or if therapy was not available to me or anyone in my situation – to seek help, and speak as openly and honestly as possible about what we’ve been through.”

She concluded: “I’m sorry, both my for my poor judgment when I was young, and for not speaking out sooner”. 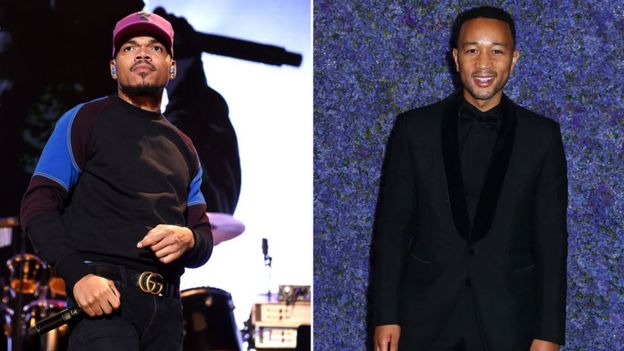 Gaga is not the only celebrity to distance herself from Kelly.

Chance The Rapper issued a statement on Sunday, apologising for collaborating with the singer on the 2015 track Somewhere in Paradise.

“Any of us who ever ignored the R Kelly stories, or ever believed he was being set up/attacked by the system (as black men often are) were doing so at the detriment of black women and girls,” he wrote.

“I apologise to all of his survivors for working with him and for taking this long to speak out.”

Rappers Meek Mill and 6lack and actresses Jada Pinkett Smith and Kerry Washington also criticised the star while John Legend, one of the few celebrities to appear in the film, said the decision to take part had been an easy one.

“It didn’t feel risky at all,” tweeted Legend. “I believe these women.”

The series is due to be broadcast in the UK on Crime And Investigation UK, from Tuesday, 5 February.

Meanwhile, the documentary has prompted fresh investigations into R Kelly in Chicago and Atlanta.

At a press conference on Tuesday, Chicago state attorney Kimberly Foxx urged anyone with information to come forward.

“There’s nothing that can be done to investigate these allegations without the cooperation of both victims and witnesses. We cannot seek justice without you.”

Foxx called Surviving R Kelly “deeply, deeply disturbing,” adding that after the series aired, she had received calls from two families concerned about their interactions with Kelly.

Meanwhile, a lawyer representing the parents of Joycelyn Savage, who appeared in the documentary, said investigators in Atlanta had contacted them on Monday.

Kelly has vigorously denied any claims against him, even releasing a song where he sings: “I’m so falsely accused”.

The 52-year-old appeared to shrug off the mounting pressure on him on Wednesday, with an unscheduled performance at Chicago’s V75 nightclub.

While there, Kelly was surrounded by fans singing along to his music. At one point he announced: “It’s my [expletive] birthday and I don’t give an [expletive] what’s going on.”

Meanwhile, Gaga fans have started a campaign to get her to replace the R Kelly version of Do What U Want with a remix that substitutes him for Christina Aguilera. займ на карту онлайн Nigeria : Burna Boy disappointed at not receiving any nomination at 2015 MTV MAMA “Yvonne is spoiling my market. I don’t feel anything for her and never will” – John Dumelo